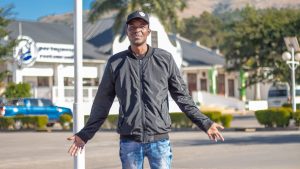 Micah , born Pfunzo Tshitema is from Limpopo, Tshisahulu near Thohoyandou. Micah is a Poet, Hip Hop artist and an author who started recording music is 2012, being inspired by the likes of Nas, Eminem, 2pac, Bob Marley and Peter Tosh because he grew up listening to their music.

Micah has released the hit single Titled “Blessings” featuring Award Winning Artist KashFlow. The single is off his upcoming EP with a sensational Title ” A Star from Afar” his self inspiration he earned from his Versatility from being a Great Poet to a Great Musician. The single follows the successful Single “Setbacks” Which had trended number 2 on South African Twitter three days prior to its release, still trending on HYPE MAGAZINE Music Platform’s Charts at number 4, probably another Micah’s commercial successful single after the hit “Read My Mind”.

From Setbacks being a Trendsetter on @HypeMagazineSA and Blessings being on Top 10 GooglePlay Music to being appreciated in another country ???????????? my Story continues being Told@sabzamk pic.twitter.com/970ABUi05Lhttps://t.co/nHN07eM3AT